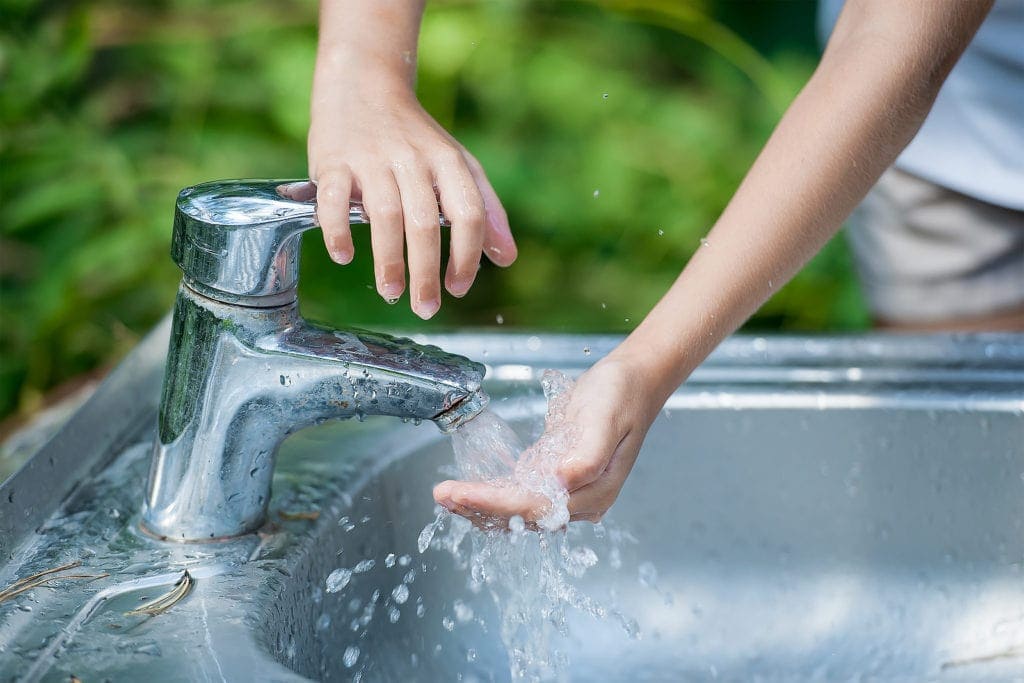 Contamination, Tips & How To, Water Filtration
By Tommy Stricklin

5 Reasons to Avoid Nitrates in Water

Much of the water supplied to homes and businesses throughout America comes from groundwater. But like any other water source, groundwater can often contain a variety of chemical compounds – one of the most common types being nitrates. Sadly, many Americans are unaware of this fact or even how nitrates get into water supplies in the first place – let alone their potential health risks, and how to remove them.

That’s why in this article, we’ll be exploring the issue of nitrates in Americans’ drinking water, delving into topics such as:

Let’s get right into it!

What is nitrate in drinking water?

Nitrate is an inorganic compound that forms when nitrogen combines with oxygen or ozone. It is commonly found in areas where intensive commercial agriculture is practiced. That’s because nitrate is an essential nutrient for plant growth.

In areas where land is heavily farmed over many years, the soil naturally becomes depleted in nitrate. Because of this, the nitrate is added back to the soil as a fertilizer to replenish the soil’s nitrate content. This also helps the plants grow faster, larger, and with a greater yield.

Even the human body produces nitrate. Nitrates may be useful in keeping our bodies healthy, as they seem to function as antimicrobial (agents that kill microorganisms or stop their growth) in the digestive system.

It also occurs naturally and at safe and healthy levels in some foods (such as carrots, spinach, and green, leafy vegetables) and is present in small amounts in processed meats. Other nitrate sources include discharge from septic systems, animal yards, feedlots, and other waste treatment systems.

How do nitrates get into drinking water?

Nitrates can be introduced into water supplies in several ways, including run-off or leakage from fertilized soil, wastewater, animal feedlots, landfills, septic systems, or urban drainage. It can be challenging to pinpoint where the nitrate in drinking water comes from because of the many possibilities.

As we mentioned earlier, nitrate is used in inorganic fertilizers in North America. When farmers spread the fertilizers and animal manures across large fields and croplands, the nitrogen not used by the plants can leach through the soil and into groundwater, which can then flow to recharge areas or private wells.

Furthermore, when fields are inactive during certain months of the year, the plant roots and microbes in the soil create nitrate deposits. Because there are no plants to absorb the excess nitrates, rain or melting now can carry the nitrates from the fields to significant water sources like rivers and streams. Residents in rural communities usually use on-lot septic systems, and some homeowners rely on lawn fertilizers. These, too, can be sources of nitrate in drinking water.

Subpar wastewater treatment systems are also widely-known sources of nitrates. When nitrogenous waste is oxidized in and around septic tanks, elevated concentrations of this waste can seep into groundwater. Once the nitrate enters groundwater systems, it can make its way into private and public wells and other water sources connected to underground aquifers.

Poorly constructed wells are especially vulnerable to toxic nitrate contamination. In most cases, water wells in rural areas are more likely to be built close to farms, food processing plants, and other facilities that create massive nitrate waste or run-off. As such, these wells are at a greater risk of being contaminated with nitrates.

The risk of detecting nitrates in your well increases if the well is shallow or you live in a flood zone. Wells are susceptible to nitrate contamination after flooding, especially if the wells have been submerged by floodwater for long periods.

How much nitrate is safe in drinking water?

In the U.S., the Environmental Protection Agency’s (EPA’s) maximum contaminant level (MCL) for human-made nitrates is less than 10 mg/L of nitrogen (or 10 parts per million). This goes to show how severe nitrate contamination can be. If this standard is exceeded, then customers must be informed immediately. In areas with groundwater nitrate concentrations, the suggested MCL is less than 5 mg/L, just below half of EPA’s MCL for nitrate.

On top of that, the EPA usually requires routing testing for nitrates, but daily levels are often not assessed. It’s also worth noting that private self-supplied drinking water systems, primarily drawn from groundwater, are not federally regulated. That means it is the owner’s responsibility to test and treat their water well for nitrate and other pollutants.

1. They may be life-threatening to infants.

Baby formula mixed with nitrate-contaminated water exposes infants to nitrate. The health effects of nitrate in drinking water are most linked to methemoglobinemia, a condition known as “blue-baby syndrome.”

In infants 0-4 months old, the nitrate is converted to nitrite in their digestive system. The nitrite binds to the red blood cells’ oxygen molecules, depleting the oxygen and potentially suffocating the baby.

A telltale symptom of nitrate poisoning is a bluish skin color, mainly around the eyes and mount. If detected at such an early stage, methemoglobinemia is rarely fatal. It can be readily diagnosed and reverse with clinical treatment. After six months, methemoglobinemia is not a threat since the nitrate-converting bacteria are no longer present in the baby’s stomach.

Pregnant women can also pass methemoglobinemia on to their developing fetuses, resulting in low birth weight. Some low-birthweight babies are usually healthy, but others may have serious health problems. Children between 12 and 14 years old have shown delayed reactions to light and sound stimuli from drinking water containing greater than 105 mg/L of nitrate.

2. They are linked to diabetes.

Studies found that nitrates may increase the risk of type 1 diabetes in children. It is believed that nitrates may lower the effectiveness of insulin in the body. If insulin isn’t doing its job, glucose builds up in the blood, resulting in hyperglycemia. If left untreated, another condition called ketoacidosis (diabetic coma) could occur. According to the American Diabetes Association, ketoacidosis develops when the body doesn’t have enough insulin. Without insulin, the body cannot use glucose for fuel, so the child’s body breaks down fats to use for energy. But how is this a bad thing?

Well, when the infant’s body breaks down fats, waste products called ketones are produced. Their body cannot tolerate large amounts of ketones and will try to eliminate them through the urine. Unfortunately, the body cannot release all the ketones, so they build up in the blood, leading to ketoacidosis. Symptoms of this condition may include shortness of breath, parched mouth, nausea and vomiting, and breath that smells fruity.

3. They may cause pancreatic cancer.

Nitrates and nitrites from processed meats, which are high in nitrates, are said to increase the risk of pancreatic cancer. When taken into the body, nitrate and nitrite can react with amines and amides to form N-nitroso compounds (NOC), which cause cancer in animals and may cause cancer in humans. Studies have also shown an increased risk of kidney, colon, and stomach cancer among people who ingest high amounts of water containing nitrate and higher meat intake. Other studies have shown modest evidence that higher nitrate intake can increase thyroid cancer and ovarian cancer among women.

4. They are linked to Alzheimer’s.

Processed meats, such as smoked turkey, bacon, and ham, contain nitrosamines, which cause the liver to produce fats that are toxic to the brain. The brain needs adequate glucose and blood flow to operate optimally. However, the nitrates from said sources may increase the brain’s resistance to insulin. Because the glucose cannot get to the brain to nourish neuronal cells, the cells die. Also, nitrosamines may become highly reactive at the cellular level, altering gene expression, and causing DNA damage.

5. They are hard to detect.

One of the scariest things about nitrate in drinking water is that it is highly soluble. As such, there’s no way to detect it unless a specific test is performed. Nitrate is colorless, tasteless, and odorless. That means it can exist in water for long periods without being detected. Now, imagine all the damage this “silent enemy” could be doing to your home and health without notice.

How to test your water for nitrates

If you suspect nitrates may be present in your water supply, the only way to be sure is to conduct a water test. If your water comes from a private well, you must be proactive and test the water yourself, as the EPA does not regulate well water. Domestic water wells near sewage disposal areas or livestock facilities should be tested at least once a year to monitor the nitrates’ concentration and other possible contaminants.

There are many options for testing for nitrates in your water. You can contact your city or county health department to request a free test to be conducted on your well water. However, Springwell offers various types of testing kits based on your budget and needs if these services aren’t available. We recommend the Watercheck, which tests for 75 different contaminants, including nitrates, heavy metals, and minerals, bacteria, physical pollutants, volatile organic chemicals, etc.

Despite the test results, consider buying a point-of-use filter to remove nitrates from your water or prevent them from invading your water supply. Remember, boiling or heating your drinking water will not remove nitrates if they are present and can even increase the concentration.

How do I remove nitrate from my tap water?

The most effective way to reduce the nitrate content in your water to safer levels is to either eradicate the source of contamination (such as a leaking septic tank or poorly built well) or install a proper filtration system if you can’t identify or remove the nitrate source.

While several selective media will actively remove nitrate, reverse osmosis (RO) is arguably the most powerful technology for nitrate removal. RO systems like the Springwell SWRO filters use a semi-permeable membrane to remove dissolved contaminants from water, including nitrate.

The Springwell SWRO is a unique under-counter point-of-use system that produces superior nitrate filtration while sitting neatly under your kitchen sink, away from immediate view. Through its fast, robust, and efficient four-stage filtration process, the system filters out heavy metals, such as lead and fluoride, pesticides, herbicides, dissolved chemicals, etc. As water enters the unit under pressure, it pushes against a semi-permeable membrane. This membrane acts as a sieve, leaving ions like nitrates on one side and allowing ion-free water to pass through the membrane.

This nitrate reduction water filter is easy to install and includes a lifetime warranty on the tanks and valves. It also has a six-month money-back guarantee. Plus, when you buy it factory direct, you save over 50 percent!

Check your water today for high nitrate levels, especially if you live in a rural area near farmland or use a private well. If you have any questions about our products or protecting your family from the toxic effects of nitrates, contact us today.

Nitrate is essential to all living things. However, it can quickly become a dangerous mineral to humans at high levels. Nitrate is life-threatening to infants and is linked to several health conditions, such as diabetes, Alzheimer’s, and various cancers. Plus, since it is difficult to detect in water, you and your family might be at significant risk, unless you test your water specifically for nitrate content. Once you obtain your water test results, consider purchasing one of our affordable, reliable, and efficient reverse osmosis systems, or contact us for help to find the one that best suits your needs and budget.