Common Odors in Tap Water and How to Remove Them 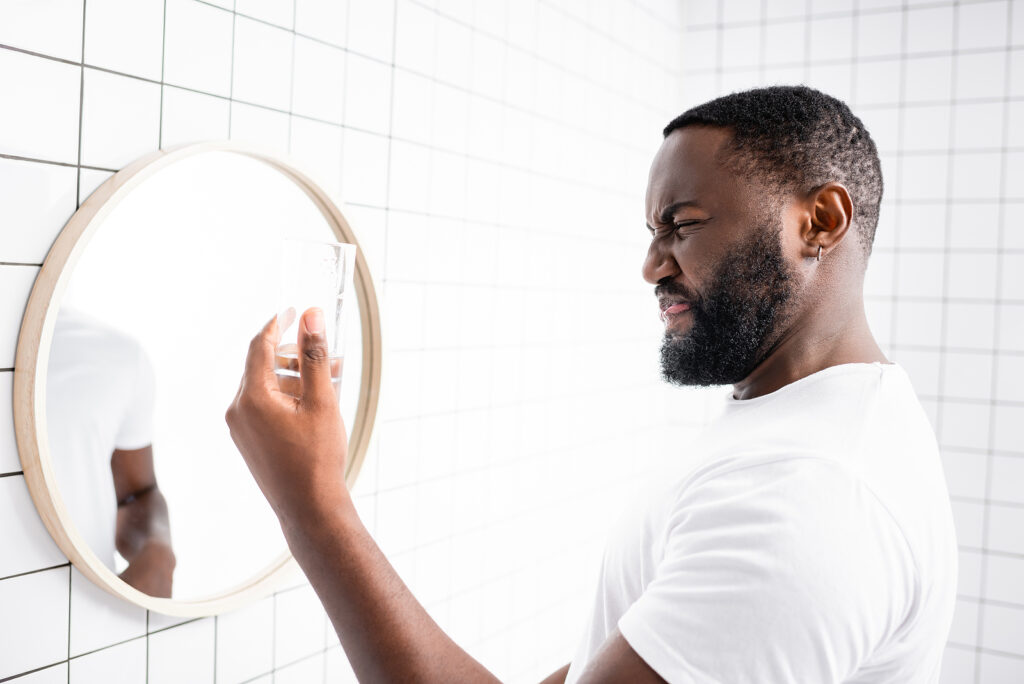 Contamination, Environment, Tips & How To, Water and Your Health, Water Filtration
By Tommy Stricklin

Common Odors in Tap Water and How to Remove Them

Nothing beats a glass of crisp, cold water when it comes to quenching thirst. But perhaps nothing is grosser than getting a mouthful of water that smells like rotten eggs or a swimming pool instead. Clean water should be colorless, tasteless, and odorless, so if yours has you holding your nose while taking a drink, that could spell trouble.

While odors in drinking water usually aren’t a health hazard, they can indicate the presence of potentially dangerous contaminants in your home’s water supply. Besides, if your tap water smells funky, we imagine it doesn’t taste too great either – and there’s no reason you should be drinking or cooking with water that smells and tastes offensive.

Read on to get a sense of what exactly could be mucking up your precious drinking water, plus details on how to test your water for the common culprits. We’ll also highlight the best treatment methods you can use to get rid of unwanted tastes and odors in your tap water.

What Causes Water to Smell?

Smelly water has a lot to do with the water source. For example, water supplied by a municipal water facility often has different odor issues than water from a private well.

Unpleasant odors in water from municipalities are commonly a result of:

Many water utilities often do their best to control taste and odor issues in water before it reaches your pipes, but as you’ll discover in this article, some smells can persist.

Well water is also prone to a handful of different odors, mainly because the Environmental Protection Agency (EPA) and perhaps other federal or local agencies do not regulate private wells. Like municipal water, chemical reactions in water heaters and sulfur bacteria in pipes can contribute to bad-smelling well water. Also, wells drilled in shale, sandstone, or near coal or oil fields are susceptible to contaminants entering the water, producing highly offensive odors.

Let’s look at some of the common odors detected in tap water as a whole and their causes.

Common Odors in Tap Water and Why They Occur

Excess chlorine is likely the offender if your tap water smells like water from a swimming pool. Chlorine is deliberately added to public water supplies across the US to kill disease-causing bacteria, viruses, and parasites, and utilities are required to add just enough to get the job done. But occasionally, they overdo it, leaving traces of the chemical behind in the water, often resulting in a strong bleach odor when it reaches your tap.

Shock chlorination of a well or plumbing system can also leave high chlorine levels in your tap water. Sometimes, public water suppliers will “shock” the municipal water supply after a bad storm by adding more chlorine than usual to prevent bacteria growth in the system. This practice can also produce a strong chlorine odor.

Components in your water heater may also be a reason for this odor. Some water heaters come with a magnesium rod meant to prevent corrosion. In most cases, the water’s natural sulfates react with the magnesium to produce hydrogen sulfide gas. Since the gas is slightly soluble in water, once you turn on the hot water tap, the heat allows some gas to escape into the air, giving off a strong, nasty smell. The problem gets even worse if your water heater isn’t being used regularly or the heater is running at a low temperature. Irregular use of your water heater may cause the hydrogen sulfide gas to build up at a faster rate.

Tap water smelling like reeks of sewage likely has to do with your sink and pipes. Bacteria from decaying foods, hair, soaps or other organic matter can produce a heavy gas that sits in pipes. When you turn on the faucet, the water pushes the gas out, making it appear as if the water itself smells. However, if the water smells, there’s likely bacteria buildup in the water heater or bacteria in the water source.

If your water comes from a well, the natural groundwater chemistry may encourage bacteria growth in and around the well. Also, a defective or improperly located septic system may be present near your well, causing nasty bacteria and other odor-causing pathogens to leach into the well system.

Rusty or corroding pipes and plumbing fixtures can release increased concentrations of trace metals like iron, zinc, manganese, copper, and lead into local water supplies, giving the water a metallic odor. This metallic smell is typically present in well water, especially if the water looks cloudy or has a tint of color, red, or other rust-looking colors. Another possible cause of metallic smell in tap water is low pH. Water with a low pH, or soft water, is more acidic. That means it can leach metals from copper or iron pipes into the water, causing the water to smell like metal.

A “fishy” odor in your water could signal an excess of naturally occurring organic compounds, metals such as barium or cadmium, or algae blooms in the water. Barium occurs naturally in mineral ores and may seep into groundwater through drilling or manufacturing. Cadmium, a chemical found in lead and copper ores, often leaches into pipes through fertilizer contamination or industrial runoff. In some cases, lakes and reservoirs can have algal blooms form during the summer. Depending on your water source, algae particles could seep into your drinking water, causing a musty, mildewy, or fishy smell.

An earthy or “dirt” smell in your drinking water can come from a chemical compound called geosmin. Geosmin is produced by a group of soil-dwelling bacteria called Actinobacteria, which release geosmin when they die. An earthy smell or gritty texture in water can also be caused by actual sediment in the water. If only a few taps in your home give water with an earthy smell, the aerator may have dirt or bacteria. If the odor comes from all the water outlets in your home, your water source may be the problem.

While it’s rare to have tap water smelling like it could fuel your car, it’s undoubtedly possible. Fuel-like odors often occur due to a leaking fuel tank or underground fuel storage tank near your well, discharge from factories or landfills contaminating the water supply, or runoff from agriculture getting into the water. If your drinking water smells like gasoline or petroleum, it may indicate the presence of dangerous fuels. Ingesting fuel-contaminated water may cause several adverse health consequences, including anemia, increased risk of cancer, and liver and kidney problems, so please take remedial action to protect yourself and your family.

How do I test my water for odor removal?

Your nose may pick up when something is “off” about your drinking water, but testing the water tells you precisely what contaminants or impurities might be doing the dirty deeds. However, before doing the water test, it’s essential to know if the funky smell is coming from the pipes or the water itself.

To track down the culprit, fill a glass of water and take it away from your sink (perhaps to your bedroom) before smelling it. If it doesn’t have an odor, it’s likely your pipes causing the smell. In some cases, it may be the water heater causing the problem, or leftover food may be lingering near the sink. But if the odor is in the water itself, conducting a water test is critical.

If you decide a water test is necessary, we recommend the standard Watercheck water testing kit from the National Testing Laboratories, Ltd. This testing kit lets you check for a broad range of contaminants possibly lurking in your drinking water and causing odors and contamination issues. What’s more, the instructions are pretty simple:

How do I treat odors in tap water?

Single-source systems can be easily installed at specific taps in your home, giving you easy access and control over your water quality. Countertop and under-sink filters are easily installed and filter out debris, sediment, heavy metals, and chlorine chemicals to give you better-smelling water.

If foul-smelling water is a widespread issue in your home, a point-of-entry system may be the better solution. Whole-house water filter systems connect to your existing plumbing line, filtering all the water passing into your home. Select whole house filter systems, like the Springwell CF1, will eliminate up to 99.6 % of odor-causing contaminants and impurities, including chemicals like chlorine, chloramine, sediment, and heavy metals like barium, lead, and cadmium. For even more powerful filtration, our optional UV water purification system add-on kills 99% of bacteria and other microbes known to cause unpleasant odors in tap water.

With Springwell Water Filtration Systems, you can enjoy drinking water that is crisp and odor-free in a breeze! If you want to learn more about why your water smells and how our affordable and highly effective filtration systems can help remove unwanted odors from your tap water, please call us at 800-589-5592 or write to us today!

Drinking water odors often come from different sources, from chemical reactions in water heaters and chlorine to bacteria buildup in pipes and fuel. The good news is that these common odors aren’t harmful to your health. However, you should always be mindful that if your water smells “off,” it could be due to a particular contaminant that may be harmful to your health if consumed. Even more awesome news: If your water smells, you can get it tested and install one of our reliable, affordable, top-of-the-line water filtration systems to eliminate any offensive odors and potentially dangerous contaminants that may be lurking in your drinking water.