How to Get Rid of Rotten Egg Smell in Water 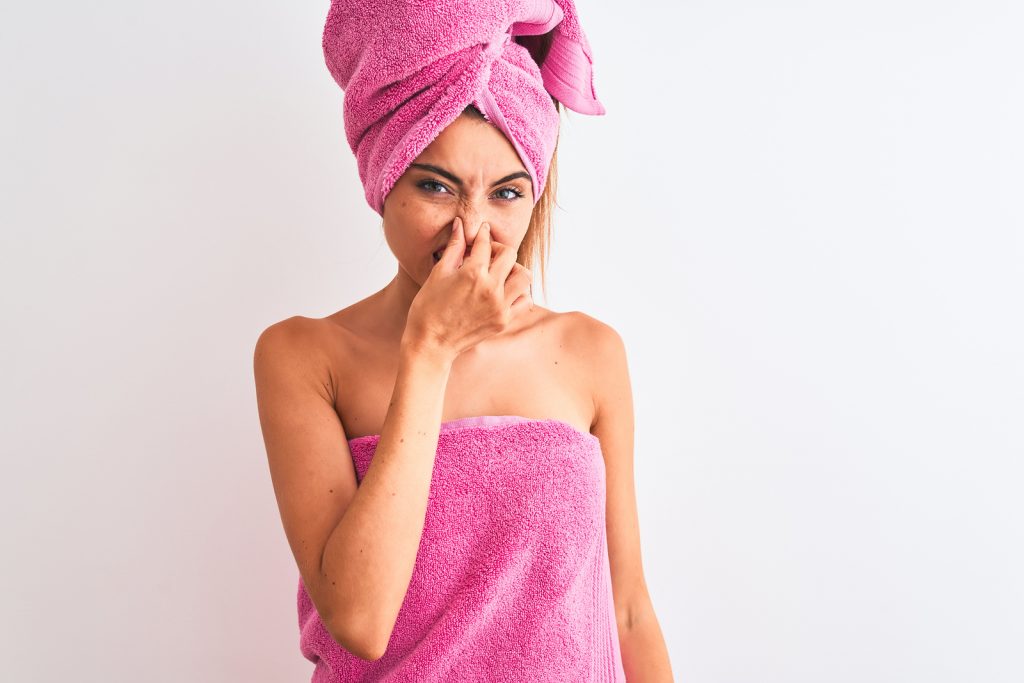 Tips & How To, Water and Your Health, Water Filtration
By Tommy Stricklin

Why Does My Water Have A Sulfur Smell?

Imagine coming home from a dreadful day at work. You draw a bathtub of hot water to unwind and forget about the day’s stresses. As the tub fills up, you smell a terrible rotten egg odor coming from the hot water. Moments later, you notice reddish-brown, orange, and black rust particles floating around in the bath. What the heck is going on? What do you do?

Don’t panic. Rotten egg smell in water and rust stains are common problems for many homeowners. But thankfully, they are pretty easy to fix. In this article, we will explain the main causes of these issues and what you can do to get rid of them and prevent them from ever reoccurring in your home.

Water can sometimes accumulate a chemical gas called hydrogen sulfide, which creates a horrible rotten egg odor as it is released. This gas occurs primarily in well-water and groundwater and is produced by certain “sulfur bacteria”, chemical reactions inside the water heaters, pollution, or as a result of decay and chemical reactions with soil and rocks.

A major source of the hydrogen sulfide in cold water is Sulfate-Reducing Bacteria (SRB’s). These bacteria are not known to cause any diseases, but they “inhale” sulfate ions and “exhale” hydrogen sulfide, just like we inhale oxygen and exhale carbon dioxide. Similar to how an unventilated room can get stuffy when its jam-packed with people, any section of plumbing where there is no water flow can get smelly after a while when SRB’s are present. Because of this, the SBR’s will produce a strong odor in the cold water at first, then the odor may subside as the water flows.

2.  A corroded magnesium or aluminum “anode rod” in the water heater

The Effects of Sulfur Water

When the soluble sulfides in hydrogen sulfide are hydrolyzed in water, it can corrode metals such as iron, copper, steel, and brass. When iron and steel are corroded from sulfur, they form ferrous sulfide or “black water.” This can blacken silverware and discolor copper and brass utensils.

Sulfur also makes it difficult to clean your laundry. It also corrodes exposed parts in washing machines. Iron and manganese, often present with hydrogen sulfide, can turn water black and greasy. If left untreated, the water can stain laundry, washing machines, sinks, and kitchenware. When the untreated water is used to do laundry, the chlorine bleach (if used) reacts with the iron and manganese and form dark rusty or brownish stains on clothes.

How to Get Rid of Rotten Egg Smell or Sulfur Water

There are several methods you can use to remove sulfur from water. The effectiveness of each treatment method depends on various factors, including the level of sulfur in the water, the amount of iron and manganese in the water, and whether or not bacterial contamination must also be treated. Before going forward with any of these treatment methods, you need to consider the simplicity of the approach as well as the total cost including installation, maintenance, and chemical expenses.

The most effective way to treat and prevent sulfur from affecting you and your water is an iron filter. An iron filter can eliminate hydrogen sulfide in water as well as iron and manganese. This filter works by oxidizing the hydrogen sulfide then converting it into insoluble sulfur, which is then removed by the filtering process.

Performing a 3% hydrogen peroxide flush can help get rid of anaerobic bacteria. To achieve this, shut off your water’s heater’s cold-water inlet valve, drain some of the water from the water heater, then disconnect the metal hose that connects to the cold-water section of the heater.

Next, reconnect the hose, then turn the cold-water valve back on to refill the tank and let it sit for a few hours. The peroxide will destroy the bacteria and remove the smell that they give off. You could also use chlorine bleach, but the peroxide is much safer and more environmentally-friendly.

The presence of sulfur odor at only certain sinks in your home could mean that the source is somewhere in the drains, fixtures or pipes – and not the water. In this case, a simple disinfection or flushing procedure may be enough to remove the odors. However, if you can detect the odor at every faucet, then the source is most likely the water itself. Here, a whole house well water filtration system with a UV filter would be recommended. But regardless of the source, installing a whole house well water filter that removes hydrogen sulfide and bacteria is ideal. These systems can reduce bad odors and protect you and your family from other chemicals and microbial contaminants.

Springwell Water also has a great line of activated carbon whole house water filters that removes as low as 1 ppm of hydrogen sulfide from the water, this would be ideal for homes on city water that might also have chlorine in their water. These systems absorb and trap the gas in the pores of the carbon, thus removing it from the water. The UV filter treats both bacteria and hydrogen sulfide gas.

Why are there reddish-brown, rust-colored and black stains in and on my laundry and plumbing fixtures?

The stains in your sinks, tubs, toilet bowls and on your laundry are a result of what’s in your water. If you have a buildup of iron or other minerals in your water supply, you may notice that no matter how often you clean your sinks or toilets, they still accumulate reddish-brown, orange, or black stains around your drain or inside your toilet bowl. These stains are caused by large amounts of iron in your water. This is because minerals like calcium, iron, and magnesium attach to nearly every surface they encounter.

In deep wells where oxygen is relatively low, water containing dissolved iron and magnesium will still appear clear and colorless at the tap. But once it is exposed to air, the iron becomes oxidized and leaves a solid reddish-brown stain on laundry, plumbing fixtures, porcelain toilet bowls, and can even affect your hair and skin. When rust forms in your washing machine, it can stain your clothes as well, leaving some white fabrics appearing slightly yellow or orange after being washed.

The best way to prevent iron from entering your home is to add a whole house well water filter (WS1) or an ion-exchange (salt based) water softener to your water supply.

Premium whole house well water filters will remove up to 95% of the iron in your home’s water supply and will protect your plumbing fixtures and water-using appliances from stains, rust, and slime. That means no more stains, discoloration, and scale on your laundry and dishes and in your sinks, tubs and toilet tanks. Furthermore, most quality whole house water filters can eliminate the bad taste and smell, and help control bacteria growth.

Some ion-exchange water softeners contain sodium, which combines with the iron chemically, removing the rust from the water.

Sulfur and iron in water are two common problems for many Americans. However, they are quite easy to fix. Just make sure to follow the guides in this article to choose the treatment method(s) that are best for your particular situation.

If you need any help choosing the right system, feel free to visit our website at www.springwellwater.com or contact us directly.