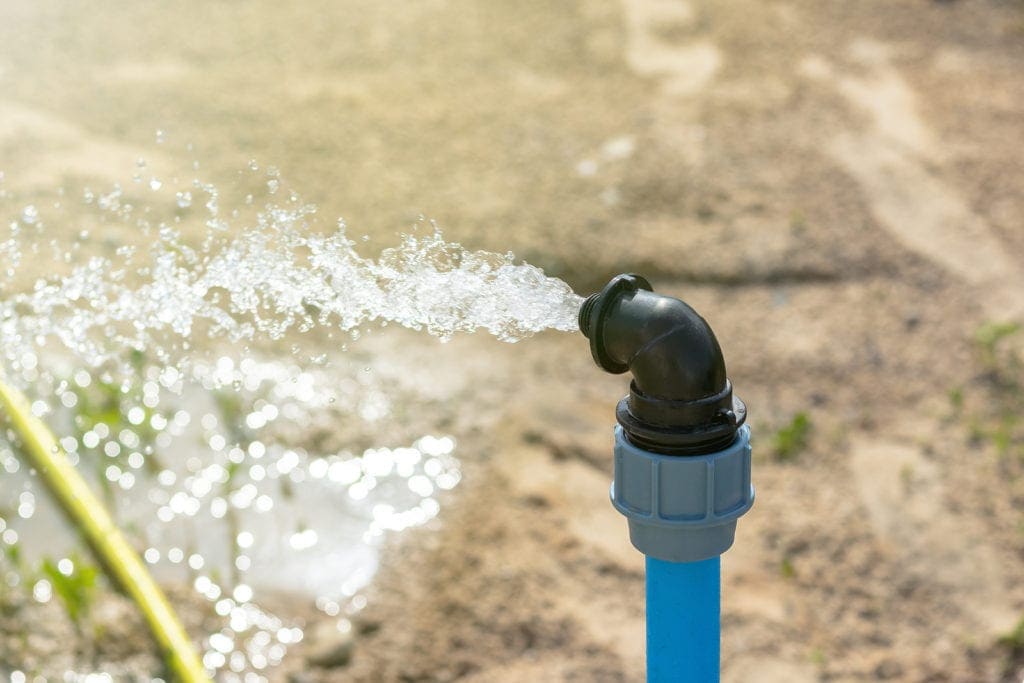 Let’s play a riddle game: I am a precious treasure hidden beneath the Earth’s surface. I account for at least 30 percent of the total freshwater on the planet. I am one of America’s most invaluable natural resources. What am I?

Good try, but the answer is groundwater.

More than half of the US population, including 99 percent of residents in rural areas, relies on groundwater for everyday use. Millions of homeowners with private wells use it for drinking and household duties, farmers use it for irrigation, and the industry needs it for manufacturing. Some groundwater sources have been heavily pumped, so much that their water levels have decreased too low for people to tap. But that’s not the only concern. Groundwater quality is also under constant assault by a variety of sources.

Under most conditions, groundwater is safer and more reliable than surface water. However, contaminates can still penetrate the soil and leach into it. The pollution of this vital resource is nearly always the result of human activity – although it sometimes occurs from natural processes. Virtually any activity that releases chemicals or waste into the environment, either intentionally or accidentally, has the potential to pollute groundwater.

In this article, we’ll be highlighting ten of these destructive activities and explain how to protect your home from the contaminants that may emerge as a result.

Groundwater is what it sounds like – the water that has traveled down from the soil surface and collected between sediments and cracks in rocks. The water then fills all the empty spaces underground until it reaches an impenetrable layer of rocks deep below the surface. Over time, it is collected and contained in bodies of rocks and sediment called aquifers. But it doesn’t stop there. The existing groundwater often continues to move until it discharges into another aquifer or water body like a lake, spring, river, ocean, or until a human-made well extracts it. It can also be obtained for industrial uses such as large-scale farm irrigation. Afterward, it is recharged by precipitation, snow melt, or water seepage from other sources, including irrigation and leaks from water supply systems.

Why is groundwater important?

Groundwater is a vital natural resource. It is the primary source of water for the vast majority of the rural population who do not get their water delivered to them from a municipal water provider or private water company. It’s also heavily relied on by the food industry and farmers for irrigation. When rainfall is scarce, and there is more demand for clean drinking water, groundwater can be extracted to meet the demand. It is also estimated to be used for about 43 percent of the total irrigation use worldwide.

When it comes to the environment, groundwater is the great salvation. It helps maintain the water level in springs, ponds, marshlands, swamp, streams, rivers, and bays – especially during the drier months when there is little direct recharge from rainfall. Keeping these water bodies replenished is essential for wildlife and aquatic species. It also helps to sustain navigation through inland waters in the drier seasons by maintaining high-enough water levels.

How does groundwater become contaminated?

Natural poisoning of groundwater is common around the world. Still, humans are to blame for much of the problems affecting groundwater today. Pollutants from various sources can seep into aquifers and contaminate its contents. Whenever it rains or when large amounts of snow or ice melt, the water picks up any loose liquids and contaminants it passes along the way and washes them down into aquifers containing large groundwater deposits.

Depending on its physical, chemical, or biological properties, a contaminant released into the environment may move within an aquifer in the same way groundwater does (some contaminants won’t always follow groundwater flow due to one or more of these properties). Just as groundwater usually moves slowly, so do pollutants in groundwater. Because of this slow movement, contaminants tend to remain concentrated, forming a plume that flows along the same path as the groundwater.

Groundwater contamination won’t always be a result of human activity. Some substances found naturally in rocks and soils, such as arsenic, iron, chlorides, sulfates, fluoride, or radionuclides, can become dissolved in groundwater. Other naturally-occurring substances, such as decaying organic matter, can move in groundwater as particles. Some of these contaminants may accumulate in excess quantities, posing a health threat if consumed. Others may produce an unpleasant odor, taste, or color. Groundwater containing these materials needs to be treated before it is used for domestic uses.

2. Pesticide and Fertilizer Use

Agriculture is a huge source of groundwater pollution. The spreading of slurry, fertilizers, pesticides, fungicides, insecticides, herbicides, and animal waste on the land can result in pollutants, such as nitrates and bacteria, seeping into underground water sources. These pollutants can have severe adverse effects on plants, animals, and people who rely on these water sources. Some of them can even stay in the ground for many months to many years. Atrazine, a common weed killer, is linked to congenital disabilities, cancer, and low sperm counts in humans.

3. Waste from Sewers and Other Pipelines

Many of us don’t realize that the way we dispose of waste can impact the quality of the same groundwater we rely on. When we improperly dispose of materials such as cooking and motor oils, lawn and garden chemicals, paints and paint thinners, medicines, disinfectants, etc., they usually end up in groundwater wells. Besides, many substances used in the industrial process should not be disposed of in drains at the workplace because they could contaminate a drinking water source. Pouring the wrong chemicals down the drain or neglecting to discard medication properly can harm your groundwater sources and, ultimately, your health and possibly that of the people living in your household.

Hydraulic fracturing, or “fracking” is a process used to drill for natural gas. A mixture of chemicals is combined with water and forced deep into cracks in the ground, opening them to gain more access to the gas. EPA scientists are still investigating whether natural gas drilling is contaminating groundwater sources in some Western States. But many homeowners have abandoned their houses after methane seeped into the water, and at least one house exploded in 2003, killing three people inside.

Mining and quarrying can release pollutants previously trapped in rocks into surrounding underground water sources. Precipitation causes these soluble chemicals to leach into the groundwater below. These wastes often include acid, iron, sulfates, and aluminum. Furthermore, toxins such as lead and arsenic were used in 19th-century mining, and often persist in today’s abandoned mine shafts.

When aquifers near the coast are over-pumped, there’s a risk of creating a vacuum that can quickly be filled with salty seawater. Saltwater is undrinkable and useless for irrigation, decreasing the availability of the already scarce freshwater. Saltwater contamination is a major concern for many coastal communities that depend on wells for drinking water.

Military sites are home to some of the most dangerous contaminants, including trichloroethylene (TCE) and per- and poly-fluoroalkyl substances (PFAS). Even today, some US military facilities are plagued by contamination. Worse, some contaminants found in and around those facilities have drifted into some groundwater supplies. TCE is believed to damage the nervous system, lungs, and liver and cause abnormal heartbeat, coma, or even death. It’s also believed to cause cancer in humans. PFAS may lead to problems like thyroid disease, damage to the liver and kidneys, elevated cholesterol, and effects on fertility and low birth weight. And similar to TCE, it is a possible cancer-causing agent.

Ever heard the saying, “What goes up must come down?” Well, that principle also applies to pollutants released into the atmosphere. These contaminants eventually return to Earth in rain, snow, and other forms of precipitation. Surface water then leaches these pollutants into groundwater. Moreover, nitrates and sulfates emitted from power plants and factories can cause acid rain, which streams through the soil and acidifies groundwater supplies.

The Effects of Contaminated Groundwater

Contaminated groundwater can result in many unfortunate situations, including:

The consequences of contaminated groundwater are usually harmful to plant, animal, and human life. Waterborne illnesses and chemical concentrations end up spreading among human and animal populations that rely on groundwater resources. To make matters worse, the people who depend on the water the most are unable to pay for expensive cleanup measures.

Drinking contaminated groundwater can have severe health effects. Dangerous illnesses, such as cholera, dysentery, and hepatitis, may be caused by contamination from septic tank waste. Poisoning may occur from toxins that have leached into well water supplies. Often, the contaminants that cause these illnesses go unnoticed for long periods while silently affecting large communities. It’s when birth defects, various types of cancers, and other symptoms appear that the effects of contaminated groundwater are reported.

Poor water quality can also harm any industry linked to groundwater use. For example, fishers suffer when their catch becomes infected with various chemicals released into groundwater or when it dies prematurely as a result.

How to Protect Yourself & Your Family Against Polluted Groundwater

While the United States Environmental Protection Agency (EPA) has set forth principles to protect groundwater, there’s no guarantee that everyone will conform. Thus, you must take steps to protect yourself and your family against contaminants in polluted groundwater. If your water comes from a private well, you are solely responsible for ensuring its quality. That’s because the EPA doesn’t monitor or regulate private wells, nor does it provide recommended criteria or standards for them.

The most reliable way to tackle potential contaminants in your well water is to install a water filtration system. Even if your water isn’t polluted, it’s always better to prepare for the unknown. Generally, water filtration systems are designed to eliminate various kinds of hazardous pollutants from water, including heavy metals, pesticides, organic and inorganic waste materials, microbes, and many more.

If you decide to go this route (which we highly recommend), your best filtration option is either a whole-house filtration system or reverse osmosis (RO) filter. The Springwell WS1 Whole-House System is the perfect solution for private wells. It uses the latest and most innovative water filtration technologies to provide high-quality, contaminant-free water to your household while being efficient and environmentally friendly. But if you are looking for a smaller, more compact unit that only treats water at specific taps in your home, our Springwell SWRO under-counter reverse osmosis systems are your best bet.

Both systems are robust, efficient, and highly affordable. They both come with a useful, easy-to-read instructions manual, plus you can use our DIY installation video as a guide if you choose to get your hands dirty. Each system comes with a lifetime warranty on all parts, as well as a six-month money-back guarantee. You also get free shipping, over 50 percent in factory-direct savings, and excellent financing options.

Contact us today to learn more about each of these high-performance units. We’ll be more than happy to help you find the system that best suits your budget and needs.

Groundwater is an essential natural resource in America, supplying more than half of its drinking water needs. While it is safer than surface water, it is still susceptible to contamination from various sources, such as mining and quarrying, natural gas drilling, waste from sewers, pesticides and fertilizer use, etc. Thankfully, our whole-house and reverse osmosis systems can protect your home and health against toxic contaminants that end up in well water due to groundwater contamination.