Effects of Arsenic in Drinking Water During Pregnancy 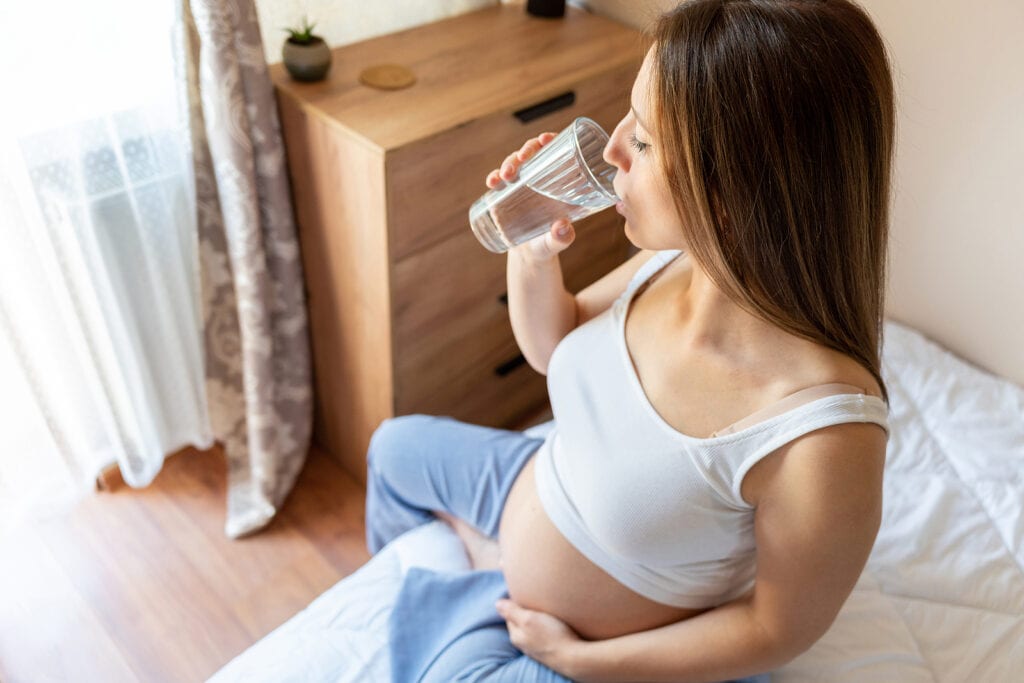 Contamination, Tips & How To, Water and Your Health, Water Filtration
By Tommy Stricklin

Effects of Arsenic in Drinking Water During Pregnancy

Getting a positive pregnancy test can be a bitter-sweet moment for many moms-to-be. Discovering you have a baby on board, you start worrying about the three glasses of wine you had the other night, the two bottles of caffeinated drinks you guzzled at work yesterday, and the cup of chamomile tea you sipped on this morning. But what about the water you’ve been drinking at home?

This might sound scary, but the water flowing from your tap could expose you and your unborn baby to dozens of dangerous chemical contaminants. One such contaminant is arsenic, a highly toxic chemical element. While arsenic exposure poses a grave threat to humans, studies have found that pregnant women and their unborn babies are especially susceptible to its poisonous effects.

If, like most moms and moms-to-be, you aren’t sure what the health effects of arsenic exposure during pregnancy are, how to tell if your drinking water contains arsenic, and how to remove it from your water supply, continue reading.

Are you exposed to arsenic through your drinking water?

Although consuming arsenic-contaminated foods is the primary route of arsenic exposure for humans, some amounts can come from drinking water – especially from wells and groundwater sources.

Arsenic is a natural component of the earth’s crust and can be found in air, water, and soil. Because it is so widespread in the environment, it can easily leach into groundwater sources. Since the government doesn’t regulate private wells, well water can contain dangerous levels of arsenic.

Inorganic arsenic, a highly toxic form of the chemical element, can enter well water through industrial waste, natural deposits, and agricultural products such as pesticides, herbicides, fertilizers, and animal feed. In regions with industrial pollution, rainwater can pick up arsenic from the air and carry it down to the groundwater, contaminating your well. Arsenic can also pollute drinking water when waste from human-made sources, like coal ash ponds, mining, and electronics manufacturing, discharges into local rivers, streams, lakes, and groundwater.

That means if you live in regions of the country that depend on private wells for drinking water, your water supply likely contains elevated levels of arsenic. The risk is even higher if you live in an area where:

Places like Arizona, Phoenix, Nebraska, Lincoln, and Reno, Nevada, are notorious for having high levels of arsenic in tap water because these areas typically source drinking water from the ground. However, some municipal tap water supplies may contain trace amounts of arsenic.

Fortunately, testing your water for arsenic is straightforward, and various treatment methods exist to remove/reduce its concentration in your water supply.

Why is arsenic exposure dangerous during pregnancy?

Like caffeine, alcohol, and some herbal teas, arsenic-tainted water should be on your list of ‘What Not to Drink During Pregnancy.’ When you ingest arsenic, your baby could be exposed, too. This toxic chemical element can easily cross the placenta, endangering the fetus.

Bear in mind that the fetus is very delicate. So, exposure to arsenic or other toxic elements during its development can cause certain complications. These possible health effects include:

According to recent studies, arsenic exposure during pregnancy moderately increases the risk of fetal and infant mortality and impaired fetal growth. Several other studies suggest an association between high levels of arsenic in groundwater (>50 ppb) and adverse pregnancy outcomes, such as an increased risk of miscarriage, spontaneous abortion, and stillbirth. In addition, a group of studies indicated that environmental arsenic exposure could significantly reduce birth weight.

Scientists from a PUBMED study conclude that “arsenic is a human developmental neurotoxicant.” In Layman’s terms, arsenic can enter the fetus’ developing brain, damage it, or slow its development. According to the literature, prenatal and early postnatal exposure below EPA limits can reduce brain weight, alter brain pathways, and reduce memory and intelligence.

Some neurological problems due to arsenic exposure can manifest later in a child’s life. For example, studies show that arsenic exposure can increase the risk of higher mortality from cancer, cardiovascular disease, and respiratory disease. Epidemiologic studies support that these and other adverse health outcomes in adulthood are linked to prenatal and early childhood arsenic exposure.

The U.S. Food & Drug Administration (FDA) analyzed scientific studies that showed an association between high levels of inorganic arsenic intake during pregnancy and adverse pregnancy outcomes. The FDA disclosed that “exposure may result in a child’s decreased performance on certain developmental tests that measure learning.”

Especially worrying for moms-to-be is that even though the EPA limits arsenic levels in drinking water to 10 ppb, research showed that “pregnant and lactating mice who drank water with 10 parts per billion (ppb) of arsenic had disruptions in their fat metabolism, leading to a reduction of nutrients in the mice’s blood and breast milk,” according to Live Science.

The fetus isn’t the only one affected by arsenic exposure. Studies have reported that ingesting arsenic can lead to increased blood pressure and anemia in women during pregnancy.

How does arsenic exposure affect adults?

Ingesting high amounts of arsenic in the short term could lead to a condition known as arsenic poisoning or arsenicosis. Per Health Line, immediate symptoms of arsenic poisoning may include abnormal heart rhythm, nausea and vomiting, abdominal pain, and diarrhea. These are usually followed by numbness and tingling of the fingers and toes, muscle cramps, and death (in extreme cases).

Long-term arsenic exposure in adults is linked to a broad range of more severe health problems. Initially, one may experience skin-related issues, such as skin lesions, pigmentation changes, and hard patches on the palms and soles of the feet (hyperkeratosis). These symptoms typically occur after a minimum exposure of approximately five years and may be a precursor to skin cancer.

In addition to skin cancer, long-term arsenic exposure may also cause cancers of the bladder, prostate, nasal passages, and lungs. The International Agency for Research on Cancer (IARC) has classified arsenic and arsenic compounds as carcinogenic to humans and has also stated that arsenic in drinking water is carcinogenic to humans.

What are the safe levels of arsenic in drinking water?

The Environmental Protection Agency (EPA) requires that the concentration of arsenic in municipal water is no more than 10 ppb, which is considered safe for lifetime exposure. However, studies suggest that this “safe” level is too high, meaning medium- to long-term exposure can still increase you and your baby’s risk of cancer and other health effects. Other studies assert that even tiny doses of arsenic increase the risk for various health problems. So, ideally, you must ensure the arsenic concentration in your home’s water supply is as close to zero as possible. To achieve this goal (or at least come close to it), measures for arsenic removal should be implemented in your home whenever possible.

Does your drinking water contain arsenic?

Arsenic has been detected in U.S. drinking water supplies serving more than 108 million Americans, so there’s a chance it’s also lurking in yours. But since arsenic has no color, taste, or smell in drinking water, it’s almost impossible to know if it’s in your water supply without a test.

If you’re on city water, you can look up the latest water quality reports from your water provider or check the EWG’s Tap Water Database for a list of contaminants (both in general and above health guidelines) in your zip code. Furthermore, public drinking water sources are monitored for arsenic and other pollutants, but you can still double-check the amount of arsenic in your water by testing it.

If your water comes from a private well, you’ll undoubtedly need to test it. Remember, federal law does not require private well users to test or treat their water for contaminants, so unless your local city or town has a law to require well water safety, it is entirely up to you to be sure that your family’s water is healthy for drinking.

With this type of water testing, the laboratory sends you a kit with instructions to collect the water sample and submit it to the facility. They analyze the water to detect contamination and other quality issues, then send you a report within a few days. While laboratory testing might not be as affordable and timely as home testing, it is more thorough and could detect many more problems with your water quality that could put you and your baby’s health at risk.

How to Remove Arsenic from Drinking Water

With doubts surrounding EPA’s “safe” arsenic limit in drinking water and the dangers arsenic presents during pregnancy, it’s a good idea to take steps to minimize your exposure. We suggest filtering the water you consume at home, whether for drinking, cooking, preparing beverages, making ice and infant formula, etc.

Reverse osmosis (RO) water filters are one of the most effective filtration systems for removing arsenic from drinking water. They also remove many other contaminants from water, including heavy metals, nitrates, sulfates, and many more.

Reverse osmosis treats water by forcing pressured water through a semi-permeable membrane, removing lead, arsenic, copper, chloride, sodium, and many other contaminants. RO systems are typically point-of-use (POU) systems attached to a dedicated faucet in your kitchen, bathroom, or both. With a POU RO system, you can enjoy filtered water for drinking, cooking, and making ice.

Learn more about the best water filter to remove arsenic from your water: The Best Water Filtration Systems for Your Home

But what about boiling water to remove arsenic or drinking bottled water?

Unfortunately, heating or boiling your water will not remove arsenic, according to the Centers for Disease Control and Prevention (CDC). Per the CDC, some water is lost through evaporation during the boiling process, causing the arsenic concentrations to rise slightly as the water boils.

As for buying bottled water, a Consumer Reports study found that some brands of bottled water have arsenic contamination at dangerous levels. Beyond that, bottled water costs add up over time, especially if you have a large family. In addition, plastic water bottles are an environmental hazard if not disposed of appropriately.

Knowing what’s in your drinking water during pregnancy is crucial to keeping you and your baby safe. Ingesting toxic chemical elements like arsenic increases the risk for prenatal and postnatal complications, including low birth weight, impaired fetal growth, infant mortality, miscarriage, spontaneous abortion, and stillbirth. Adults may experience adverse health problems, such as an increased risk of skin-related issues, cancers of the bladder, prostate, nasal passages, and lungs, and even death. Luckily, investing in a reverse osmosis water filter can help reduce arsenic in your drinking water, lowering the risk of these health effects.

For more information on our reverse osmosis systems and how they can help eliminate arsenic and other contaminants from your water supply, call us at 800-589-5592 or request a free water qualification consultation today.