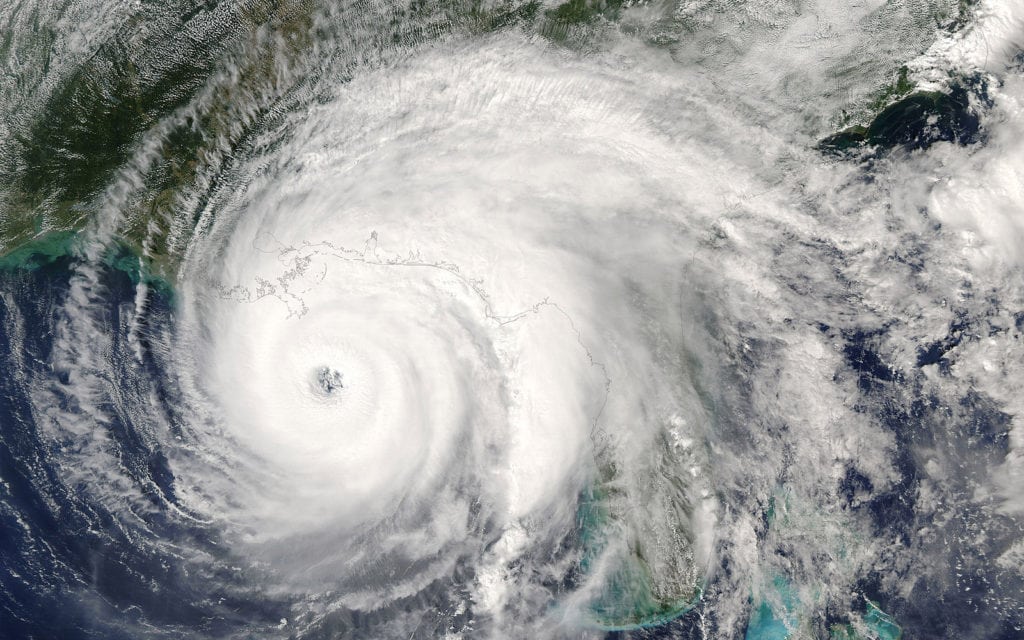 Demolished homes, flooded towns, and prolonged power outages: These are some of the tragic tales known to dominate news reports after an intense hurricane. However, these weather disasters also contribute heavily to an ongoing problem plaguing many communities for many years: drinking water contamination.

Once a hurricane makes landfall or a rainstorm causes flooding, it can dump tremendous amounts of toxins and contaminants from soil, septic systems, and other sources into our water supply. Even worse, municipal water treatment plants may not be operating at normal capacity after the storm, resulting in even more significant contamination.

While all this seems like an afterthought, given most people are concerned with their immediate well being during a hurricane, the effects of polluted water systems can linger for years, leading to severe health issues that can be impossible to reverse and even causing death.

That’s why, in this article, we’ll be exploring the effects of hurricanes on drinking water quality and steps you can take to keep your water safe during and after a storm. That way, you can better protect yourself and your family from diseases and illnesses caused by consuming polluted water.

A Brief, Recent History of Hurricanes in America

Almost every year, the U.S. experiences increasingly violent hurricanes. On August 30, 2021, Category 4 Hurricane Ida made landfall on U.S. shores, wreaking havoc across the southern U.S. The storm left more than one million customers without power in the region and caused extensive damage to homes and properties.

Although not as powerful as Ida, Florence came ashore as a Category 1 hurricane on September 14, 2018, and dumped as many as 30 inches of rain in some places. Florence caused extensive damage to homes and infrastructure in large parts of North Carolina. Even today, some residents continue recovery efforts.

Hurricane Harvey is tied with Hurricane Katrina as one of the most violent hurricanes to hit the U.S. During the four days Harvey made landfall on the Gulf coast, many areas across Texas experienced more than 40 inches of rain. At its peak, the storm dropped more than 60 inches of water in a given area. The National Oceanic Atmospheric Administration reported that “more than 6.7 million people in a 29,000 square mile area (the size of West Virginia) received at least 20 inches of rain in seven days.” Also, in the wake of the storm, clean drinking water quickly became a significant concern as the public drinking water supplies in many areas had been compromised and contaminated when floodwater inundated reservoirs.

Later during the 2017 hurricane season, Maria came and damaged or destroyed more than a third of homes in Puerto Rico and crippled the island’s power grid. It also caused severe damage in the Virgin Islands and the Leeward Islands. Estimates show some areas experienced a 9-foot storm surge, with floodwaters reaching as deep as 15 feet and floods lingering for weeks.

While these catastrophic events all had various magnitudes and caused different levels of damage and destruction, they all had one thing in common: they helped contaminate our drinking water sources with unhealthy increases in chemicals, debris, waste, and other unwanted matter.

Floodwater after a hurricane or massive rainstorm is more than just rainwater. It typically contains all sorts of harmful chemicals, sewage, sediments, and heavy metals. Here are some of the numerous ways storms can help dump contaminants into our water sources:

Contaminated water following a major flood can carry disease-causing organisms and toxic chemicals into drinking water sources. For example, the record-setting rains that came with Hurricane Florence caused over 110 pig waste lagoons to overflow in North Carolina or were at imminent risk of doing so.

These lagoons released some or all of their waste into the environment through structural damage, like when rains erode the lagoon’s banks and cause breaches. Some lagoons also overflowed and were swept over by floodwater, introducing vast amounts of pig manure into surrounding water bodies.

Not only is pig manure as nasty as it sounds, but it contains nitrites, which, in excess, is linked to a myriad of health issues, like Blue Baby syndrome. In some cases of the syndrome, nitrogen binds to the hemoglobin in a baby’s blood and makes red blood cells unable to carry oxygen.

There’s also the problem of bacteria such as E. coli and salmonella – often found in waste pits – leaching into freshwater sources. To make matters worse, bacteria in some areas are resistant to antibiotics, which would be worrisome to residents and locals who rely on private wells water.

On top of dealing with pig waste leaching into the groundwater that serves municipalities and well systems, floodwaters can carry chemical byproducts from nearby factories and other industries. Also, coal ash can bring arsenic, lead, and mercury into nearby water sources in states that rely heavily on coal to generate power. Coal ash that gets picked up by the hurricane’s floodwater or winds could easily make its way into streams and other surface waters, which could spell trouble for residents all around.

Also, since most farms use pesticides and fertilizers, there’s a good chance these toxic chemicals can end up flowing into freshwater sources. There’s also the risk of other farming pollutants, like salts, heavy metals, herbicides, and nutrients such as phosphorous and nitrogen, entering floodwaters or overflowing rivers and streams and escaping into your well system.

Hurricanes can result in a loss of power, lasting up to a couple of days or even weeks, depending on the storm’s intensity and the area affected. Sadly, when the power goes, our water treatment can go right with it.

Water treatment plants need electricity to operate, making them vulnerable to power outages. Although these facilities usually have backup generators, they may not readily obtain fuel to run the generators, especially if the power goes for an extended period. As a result, the water may be under-treated, causing chemicals, toxins, and debris to leach into the public water system. In these situations, the contamination can affect water mains and lines and individual households. In some cases, the water pumps may not have enough power to operate effectively, causing low water pressure or no water at all.

Is my drinking water contaminated?

It’s crucial to understand that floodwater could contaminate your home’s water supply after significant rainfall or a storm. Even if your drinking water looks crystal-clear and refreshing, it could still contain contaminants, many of which can put you and your family’s lives at risk when ingested. For this reason, we recommend testing your water to determine if any unwanted elements are lurking in it.

The easiest and most accurate way to determine the quality of your drinking water after a storm is to use a water testing kit, like the Water Test + Tannins Testing Kit. The standard Watercheck test kit from the National Testing Laboratories, Ltd. contains everything you need to identify irregularities in your water.

It will test your water for 75 or more common contaminants, including:

We recommend the Water test Pesticide option for even more thorough testing, as it is a complete version of the standard kit, adding 2o pesticides, herbicides, polychlorinated biphenyls (PCBs). This Pesticide kit also comes from the National Testing Laboratories, Ltd., one of the industry’s most recognized laboratories. Once you submit the sample, you may have to wait a couple of days up to a week or two to get back the test results.

It’s important to know that these and other water tests only provide a snapshot of your water quality at a given time. Water quality is dynamic and changes as quickly as water flows. So, while you wait on the results to arrive, we suggest you take steps (like those below) to ensure the water is safe and pure immediately before use.

How to Protect Your Home from Contaminated Water After a Hurricane

During or after a weather crisis like a hurricane, many municipalities might start issuing boil-water notices to dozens of communities throughout the affected state(s) to prevent residents from ingesting harmful bacteria and other microbes from their drinking water supplies.

Boiling your water is one of the safest and most effective ways to purify it. Boiling kills disease-causing organisms in the water, including viruses, bacteria, and parasites, as most of these microorganisms cannot survive in high temperatures. The heat essentially damages the microbes’ structural components and disrupts their DNA and life processes, so they cannot reproduce.

Of course, it is unwise to drink unboiled water, especially during a boil-water advisory. Why? Because doing so increases your risk of ingesting harmful microbial contaminants known to cause a myriad of health-related illnesses, including diarrhea, gastroenteritis, intestinal diseases, waterborne diseases (such as cholera, typhoid fever, and dysentery), and many other health complications, too many to list here.

But like all other water treatment methods, boiling has its downsides: For one, it can be very time-consuming, especially for an average family that consumes the recommended amount of water every day. As a result, you might want to turn off the heat before the water reaches the recommended boiling point so that you can keep up with the demand. However, the last thing you want is for you and your family to drink partially boiled water with most of the pathogens still active and present. Beyond that, bacteria residue can remain after boiling the water, which can have many hidden dangers. But perhaps the biggest drawback to boiling is that it does not remove other potentially dangerous contaminants like heavy metals, sediment, and toxic chemicals. Thankfully, there’s an excellent way to make up for these disadvantages.

Apart from boiling the water, you can also filter your water at the sink or throughout your entire household using a point-of-use (POU) filter or a point-of-entry (POE) filtration system, respectively.

If you are looking for a treatment option that can filter and purify all the water entering your home, the Springwell CF1 whole house water filtration system is the one for the job. Designed to tackle water contaminants for safe, great-tasting water that’s free from odor, bacteria, and other harmful pollutants, the CF1 provides multiple lines of defense against some of the most dangerous floodwater contaminants. Plus, you can add a sediment pre-filter and a UV purifier post-filter to eliminate even more contaminants, like sediments (for example, sand, silt, clay, dirt, etc.) and microbes (like bacteria, parasites, viruses, etc.).

Hurricanes can cause tremendous damage and destruction to homes, properties, utilities, and even human health. But too often, their impact on our drinking water supplies doesn’t get talked about enough. The floodwater from these weather disasters can dump massive amounts of unwanted materials into water sources that supply water treatment plants and private well systems. After a storm, your water is vulnerable to contamination from animal waste, toxic chemicals, agricultural runoff, etc., triggering boil water notices in areas affected. Luckily, you can install a water filtration system in your home to keep contaminants out of your drinking water and protect your family from any harm these pollutants could have caused.

If you have any questions or inquiries about any of our water filtration and purification systems, feel free to contact us at 800-589-5592 or message us from our contact page.