How to Disinfect Well Water Safely and Effectively 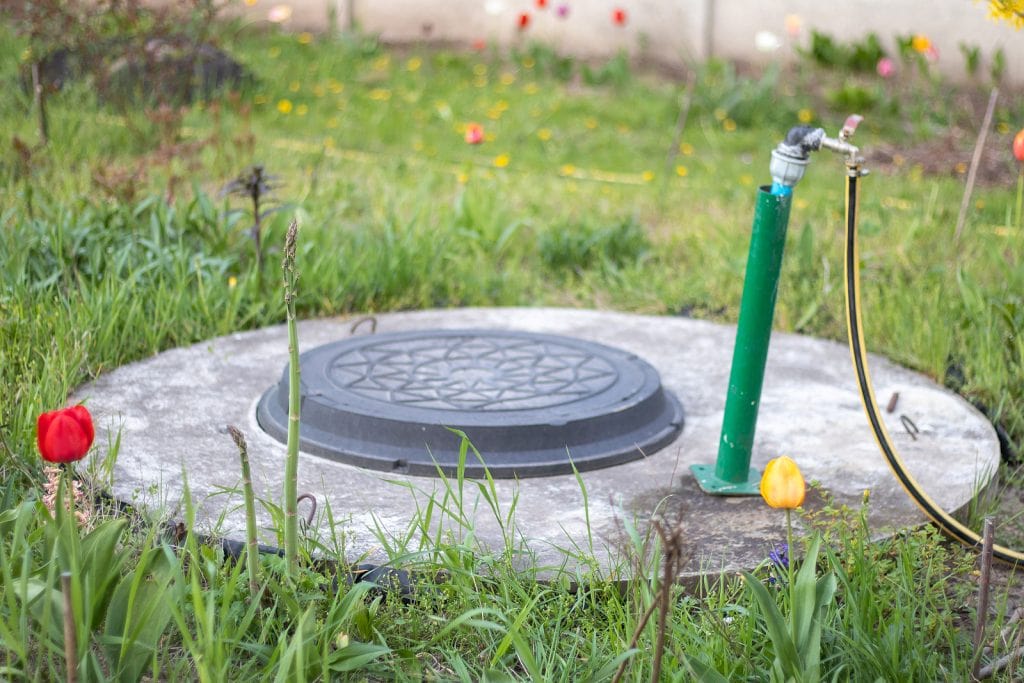 More than 43 million Americans rely on private (domestic) wells as their source of drinking water. Some use them as a backup to their existing public water system, while others depend on them exclusively. Sadly, many families continue to use and consume untreated well water, unaware of the possible dangers.

Unlike tap water, which typically comes from a municipal water supply, well water is not treated with chemicals like chlorine or chloramines to destroy disease-causing microorganisms. Instead, it is filtered as it passes through layers of rock and soil – though this doesn’t guarantee it will be safe to drink.

Naturally filtered well water can still contain potentially dangerous microbes, including bacteria, viruses, and parasites. These microorganisms may be linked to waterborne illnesses and even death, so it’s essential to test your well water regularly and disinfect it to reduce the risk of microbial contamination.

This article highlights a simple, safe, and effective chemical-based method to disinfect your well water at levels sufficient for bacteria and other contaminants to be eliminated continuously. But first, let’s discuss why water wells are more susceptible to microbial contamination than city water.

Why are Private Water Wells More Prone to Microbial Contamination than City Water?

People relying on private wells for drinking water are usually more likely to be exposed to bacteria and other microbes through their water supplies than those that get their water from a municipality. There are several possible reasons for this:

Without a strong line of defense against pathogens in well water, the organisms will travel from the well to your home’s plumbing system to your taps and water-using appliances. Once ingested, these unwanted agents can cause a range of health problems.

What Could Happen If You Drink Untreated Well Water?

You might not be able to see them – at least without a microscope – but millions of microbes live and thrive in untreated well water, many of which can be deadly to humans. These organisms fall into different groups, including bacteria, viruses, parasites, etc. Infants, children, older adults, and people with weakened immune systems are more likely to get sick or even die from these pathogens.

Let us look at how microbes in untreated well water can affect our health.

Diarrhea is one of the most common diseases caused by microbial contamination in well water. It manifests because of intestinal infection or food poisoning by drinking water contaminated with pathogens living in animal or human waste. The disease occurs primarily due to waterborne bacteria (like E. coli), viruses, and protozoans. The condition usually results in the passage of loose, watery stools that can cause dehydration (loss of electrolytes) and death in young children and infants.

Typhoid is a life-threatening bacterial infection distinguished by acute intestinal ulceration and infection. The bacteria responsible for this dreadful infection is called Salmonella Typhi, the same type of bacteria found in some eggs and chicken. The condition is more commonly known as food poisoning or salmonella poisoning. It usually spreads when people consume contaminated water or food washed with dirty water. A person suffering from typhoid can transfer harmful bacteria to their bloodstream and intestinal tract. Some common symptoms of typhoid include persistent fevers (as high as 103° to 104° F, or 39° to 40° C), weakness, headache, loss of appetite, stomach pains, rashes or red spots, muscle aches, and sweating. Typhoid affects approximately twelve million people across the world every year.

Hepatitis A is a highly infectious disease that primarily affects the liver. You can contract the disease by drinking water containing the hepatitis A virus (HAV) or through contact with someone infected. Washing and eating foods prepared with contaminated water can also expose you to the disease. People living in poor sanitation and hygiene management areas are more at risk of being exposed to the virus. Some symptoms of Hepatitis A include abdominal pain, depression, nausea, fatigue, weight loss, jaundice, fever, loss of appetite, clay-colored bowel movements, and others. The infection usually subsides in a few weeks but can become severe and last several months.

Cholera is an infection that primarily affects the small intestine. The bacterium responsible for this disease is known as Vibrio Cholerae. The virus gets transmitted through the ingestion of water that contains traces of feces. When untreated water goes through the sewage in waterways, it can affect the domestic well water supply. People affected by cholera may experience dehydration, nausea, vomiting (lasting up to one hour in severe cases), profuse diarrhea, abdominal cramps, and headaches. If not treated correctly or on time, cholera can cause death in rare cases.

Cryptosporidiosis, aka Crypto, is an infection that targets the intestines. The microscopic parasite Cryptosporidium causes the disease. This organism lives in the bowel and is present in the feces of infected humans and domesticated animals like cattle, sheep, cats, and dogs. The infection usually spreads by ingesting contaminated food or water or swimming and immersing in contaminated water. People infected with Crypto typically experience diarrhea, abdominal pain, nausea, vomiting, fever, headache, loss of appetite, etc. Some people infected with the virus may not develop any symptoms.

Some pathogens in drinking water can’t be seen (with the naked eye), tasted, or smelled. Furthermore, many of their health-related symptoms aren’t immediate. That means you can’t be sure about a pathogen’s presence (or absence) in your water just by looking at it, smelling it, or tasting it. This is where laboratory testing comes in.

Certified laboratory testing is highly accurate as it thoroughly evaluates your drinking water, detecting various bacteria, viruses, and parasites. Usually, how it works is that you order the water test kit online, and the laboratory sends you the kit with the instructions to collect the water sample from your tap and mail it back. Once the testing is complete, the testing experts send you the results within a few business days via email or fax, sometimes with a printed copy to arrive in the mail. Based on the results, you’ll know what specific contaminants have been detected (if any), their concentrations, and whether you need a treatment solution to remove them from your water supply.

The EPA recommends that you test your well yearly for E. coli and coliform bacteria at the absolute minimum. You should also test your water for radon and arsenic, minerals such as iron, manganese, nitrate levels, and any volatile organic compounds to ensure your home’s water is safe. If you notice a change in water quality (appearance, odor, taste, etc.), it’s a good idea to have your well tested, even if it hasn’t been a year since the last test.

How to Disinfect Your Well Water Safely and Effectively

If the test results indicate that your water contains microbes, you’ll want to consider ways to get rid of them before they do any severe damage. Even if your water is microbe-free, you can still look for ways to prevent future contamination.

Two of our most frequently recommended solutions are chemical injection and UV disinfection.

Installing various filtration systems and water softeners can improve water quality and purity. But sometimes, a well’s contaminant levels are so high that it is necessary to use a chemical injection system.

Chemical injection involves adding various amounts of a chemical disinfectant, such as chlorine, to the water. Chlorine’s high toxicity helps destroy bacteria, microbes, and pathogens that can leach into your water supply. It also helps reduce offensive tastes and odors in well water. It can even eliminate molds, slime, algae, and bacteria that grow in water supply reservoirs, storage tanks, and on the walls of water mains.

When water contains high levels of chlorine, the taste and smell of the water can be affected. Chloramines can impact water quality and purity, too. However, efficient chlorination systems, like the Springwell CIS Well Water Chemical Injection System, use a flow sensor to control the amount of chlorine added to the water, thus preventing overdosing. The flow sensor helps deliver a precise amount of chlorine residuals proportional to the water flow through the system.

Then again, you probably still don’t want the chlorine residue sticking around in your drinking water after it’s done its job. After all, chlorine can give water an unpleasant taste and smell and may bleach clothing and laundry. It may also burn your eyes and nose and cause other health risks when ingested over prolonged periods.

Although the Springwell CIS doesn’t have a built-in carbon filter to dechlorinate the water and remove other potentially toxic contaminants, you can add a whole house water filter to eliminate the excess chlorine from the water before it is delivered to the home. The goal is to ensure no chlorine gets into the disinfected water supply.

Since protozoan pathogens like Cryptosporidium and various other microbes are resistant to chlorine, you’ll need another disinfection method to combat them.

Ultraviolet (UV) water purification has been one of the most potent defenses against harmful biological contaminants in drinking water, offering superior protection against bacteria, viruses, molds, and other disease-causing microorganisms in well water.

UV systems use ultraviolet light, which emits enough radiation at specific intensities to penetrate bacteria and other microorganisms and alter their DNA. This renders most organisms entirely harmless, preventing them from spreading through drinking water.

For instance, the Springwell UV Water Purification System is proven to control microbiological issues in water, including E. coli, Cryptosporidium, and Giardia lamblia. It kills 99.9% of harmful pathogens, viruses, and bacteria to protect your home against contaminated water.

Note that the source water should be low in hardness and free of iron, manganese, and sediment before disinfecting it with UV light. If you already have pre-filters, you’ll need to install the UV sterilizer at the end of your system just before the water enters your house.

What About Boiling the Water?

In some emergencies, well users may be temporarily advised to use bottled water or to boil the water. Since most microorganisms cannot survive in high temperatures, boiling can be very effective against disease-causing organisms in water, including viruses, bacteria, and parasites. However, boiling should only be a temporary solution and should not be a substitute for additional filtration.

Over time, boiling water can take extra time and effort, especially for an average family that consumes the recommended amount of water daily. During these long, tiring boiling sessions, you might be tempted to turn off the heat before the water reaches the recommended boiling point to keep up with the demand. Giving in to the temptation means you and your family could drink partially-boiled water with some number of pathogens still present and active. On top of that, bacteria residue can remain after boiling and carry many hidden dangers.

Though thought to be a thing of the past, millions of American households still rely on water wells for drinking water. But what many of these families don’t know is that untreated well water typically contains a range of potentially dangerous microbes, including bacteria, viruses, and parasites, to name a few. Ingesting these microorganisms can cause various health issues, such as diarrhea, cholera, hepatitis A, and even death in severe cases. Luckily, installing a chemical injection system or a UV water purification system can help destroy disease-causing microbes in well water, purifying your water and keeping you and your family safe.

If you have questions about our chemical injection or UV water purification system, contact us at 800-589-5592 or message us via chat.