Microplastics in Drinking Water & How To Reduce Risk of Ingestion 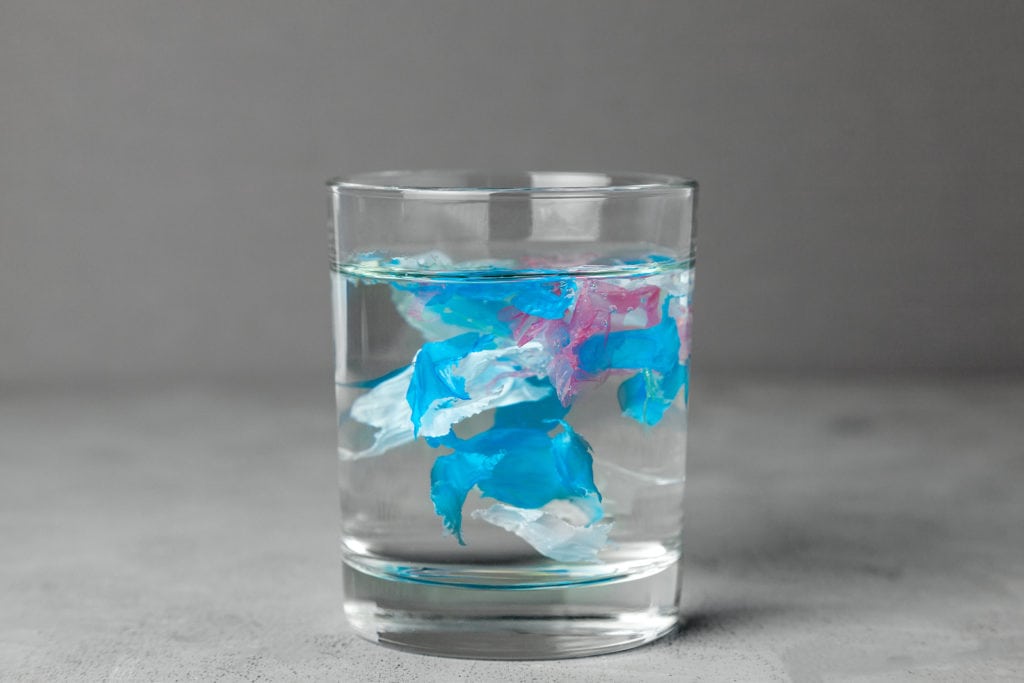 Water and Your Health, Water Filtration
By Tommy Stricklin

The Potential Risks of Microplastics in Drinking Water

Consider this: The average American produces an estimated 234 pounds of plastic waste every year. Of that, only about 9 percent makes it to a recycling bin. If our math is correct, the U.S. population (roughly 330 million) generates a staggering 77.2 billion pounds (or 38.6 million tons) of plastic annually. Let’s not forget the millions of tons of plastic waste produced by companies like Coca-Cola and Nestlé yearly.

Plastic is one of the most widely used materials in the U.S., mainly because of its high resilience, flexibility, and convenience. It’s used to make thousands of single-use items, from grocery bags to water bottles and is also found in cosmetics, shampoos, electronics, storage containers, and countless other products. Sadly, these and other conveniences encouraged a throwaway culture that helped reveal the material’s negative side.

The problem with plastic is that it can persist in the environment for hundreds or thousands of years – and in the meantime, wreak havoc on the environment and possibly our health. Even then, it doesn’t decompose. Much of it is broken down into smaller fragments called “microplastics.” These bits of plastic have been detected in rivers, wastewaters, oceans, and even in our drinking water.

The next time you pour a glass from the tap or grab a case of bottled water at the grocery store, remember that it may contain microplastics – regardless of how crystal-clear and refreshing it looks. Read on to find out what might happen if you ingest these microplastics, and what you can do to eliminate them from your home’s tap water.

Microplastics are tiny pieces of plastic smaller than five millimeters (about the size of a grain of rice). Still, many of them are much smaller and can only be seen under a microscope. Microplastics consist of carbon and hydrogen atoms held together in polymer chains. They also include chemicals, such as phthalates, tetrabromobisphenol A (TBBPA), and polybrominated diphenyl ethers (PBDEs), which often leach out of the plastics after entering the environment.

Plastic pollution is one of the main reasons why microplastics are everywhere. Since they are typically present in a variety of products – from cosmetics and synthetic clothing to plastic bags and bottles – it’s easier for them to enter the environment then our drinking water.

How do microplastics get into drinking water?

Reports show that as much as 94 percent of America’s tap water is contaminated with microplastics, including samples from Congress buildings, the Trump Tower, the U.S. Environmental Protection Agency’s headquarters, the U.S. Capitol, and bottled water from large brands like Aquafina, Nestle, and Dasani. Separate studies also found microplastic contamination in a handful of well water samples. But how on earth do microplastics end up in tap water and bottled water?

Microplastics are said to enter our environment and our waterways through multiple different channels, including:

Once the microplastics get into the environment, rainwater can cause them to seep deep into the ground and pollute well water. As for municipal water, when plastic pipes start to wear, they can release bits of plastic and chemicals into the water being transported from the water treatment plants to your home. Besides, the current standard water treatment systems at many of these plants do not filter out all of the microplastics due to the particles’ small sizes. These unfiltered microplastics often end up in our drinking water at home and into our body. However, that doesn’t mean bottled water will provide a microplastic-free alternative to tap water.

A collaborative study between scientists at the State University of New York, Fredonia, and Orb Media revealed that over 250 water bottles from 11 brands in the U.S. and other countries are contaminated with microplastics. The study also found an average of 325 plastic pieces as small as 100 micrometers for every liter of water sold.

The type of plastic used to make disposable water bottles may contain chemicals that can leach into the water or small plastic particles can be released into the water.

What are the potential health impacts of microplastics?

A 2019 study estimated that “the average American adult consumes anywhere between 126 and 142 tiny plastic particles every day, and inhales another 132 to 170 plastic bits daily.” But what happens once microplastics get into the body? Do they just sit in the gut? Do they enter the bloodstream? Or do they pass through without doing any harm?

Scientists are still uncertain about how much microplastic the body can tolerate and how much damage it can do. In 2019, the WHO published a report that concluded that microplastic particles in drinking water are not harmful to human health – at least at current levels. However, there are still concerns that microplastics could have adverse health effects on humans.

Microplastics may accumulate in the body.

Some experts believe that once these bits of plastic accumulate in the body, they could be toxic. Generally, microplastics take the form of fragments, film, fibers, beads, and pellets. That means they can be made from different materials with hundreds of different chemical additives. For this reason, some microplastics might carry toxic chemicals into the body, and some could be a source of bacteria and parasites.

They may introduce bioactive chemicals into the body.

Most of our food and water containers, as well as babies’ milk bottles and cups, are made using polycarbonate plastic, which often contain bioactive chemicals, like Bisphenol A (BPA) and phthalates. Usually, it’s not the plastic itself that poses a threat to human health, but the potentially harmful chemicals like those we mentioned earlier that are usually added to plastics to modify their appearance and functionality.

These toxic chemicals can leach from the containers or wrappings into the food, drinks, and water they’re holding, especially when heated. BPA, in particular, is an endocrine disruptor. It can imitate the body’s hormones and interfere with the production, secretion, transport, action, function, and elimination of natural hormones. Researchers suggest that it can also cause several adverse health effects, such as:

Phthalates are also said to be endocrine-disrupting chemicals. They are often used to make plastics more flexible. Still, they’ve been linked to reduced testosterone levels in male fetuses, which is necessary for the proper development and function of the male reproductive organs.

The impact of microplastics in drinking water on human health is yet to be thoroughly investigated, but from the limited evidence available, it is clear that ingesting them can bad for your health. Until more reliable information becomes available, we must keep our guards up and try our best to avoid consuming microplastics.

What actions should be taken to minimize or prevent microplastic pollution in drinking water?

Minimizing or preventing microplastic pollution in drinking water requires combined, strategic action from governments, policymakers, and the public. Some of these actions could include:

Care must be taken, however, to select actions that won’t create new problems.

What can you do to reduce your risk of ingesting microplastics?

The truth is, you can’t avoid microplastics or the chemicals found in plastic. That’s because microplastics are everywhere. Nevertheless, you can at least avoid unnecessary extra exposure from microplastic in drinking water.

Should you switch from bottled water to tap water, you’ll need to ensure that the water flowing from your tap isn’t contaminated with other harmful pollutants. There are several ways to achieve this, including:

If the results or information you obtain show that your water is contaminated, the ideal next step is to purchase and install a quality water filtration system. Since microplastics and other contaminants have been found in tap water, it’s highly likely that the water treatment systems at some municipal plants aren’t optimized to keep them out of water. Therefore, you need a solution that works.

Springwell offers two particularly reliable and highly efficient water filtration solutions that can eliminate microplastics and a host of other toxic contaminants from your drinking water. These solutions are the Springwell CF1 whole house filtration system, and our SWRO-Nickel and SWRO-Bronze reverse osmosis systems.

The CF1 is a point-of-entry system that filters all the water coming into your home. It is highly efficient and is equipped with some of the latest and most powerful water filtration technologies to eliminate up to 99.9% of contaminants from water. The CF1’s sediment filter removes contaminants down to 5 microns, so it will remove most microplastics.

Our reverse osmosis under-counter models are point-of-use systems that filter water at specific areas in your home. In general, reverse osmosis filters can filter particles as small as 0.001 microns and are most effective for removing microplastics. Our 4-stage SWRO-Nickel and SWRO-Bronze systems are no exception. Their sediment filter and carbon block filter remove contaminants down to 5 microns. They can also catch extremely smaller particles, due to the filters’ RO nanofiltration membranes.

Springwell’s drinking water filtration systems come with a variety of customizable features to suit your home’s needs. When you purchase one of our unique water filtration systems, you also receive the peace of mind of a lifetime warranty and a six-month money-back guarantee. You’ll also get free shipping, plus if you cannot pay the full cost of the system upfront, you can simply finance it with affordable monthly payments up to a year.

Contact us to find the right option for clean, safe, and microplastic-free drinking water in your home or shop our whole-house filters or our reverse osmosis systems.

Researchers have found that microplastic particles are everywhere, including our drinking water. While scientists are working to understand the potential health effects of microplastic exposure, it’s best to implement measures to protect your health and that of your family. If you want to cut away plastic junk from your water, an excellent place to start is purchasing and installing a reliable water filtration system that can remove bits of plastic down to at least 5 microns in size.